An Iron Pot in Coal

In 1912, two employees who were shoveling coal in the Municipal Electric Plant in Thomas, Oklahoma, broke apart a larger chunk for the furnaces when, to the surprise of both men, an iron pot fell of the chunk. Several experts subsequently examined the iron pot and it was declared to be genuine. The imprint of the pot could also still be clearly seen in the broken chunks of coal that had encased it. According to Robert O. Fay of the Oklahoma Geological Survey, the Wilburton mine coal in which the pot was found is about 312 million years old. 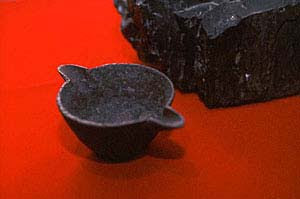