Further evidence of ancient machining can be observed in the mysterious ‘Antikythira Device,’ an artifact that was found at the site of an ancient shipwreck just off the Greek island of Antikythira. The artifact is manufactured from bronze and consists of a series of interlocking cogs and wheels and although heavily corroded, is quite unique and very extraordinary. When it was first discovered experts thought it was possibly some type of navigational instrument, but a more detailed investigation revealed it to be something vastly more complex. Radiograph and X-ray examination revealed the existence of a differential turntable comprising
of over 30 interlocking geared cogs set at various different planes fixed within the device testifying to an extremely high degree of craftsmanship and a clockmakers attention to detail. It is quite obviously a precision instrument of enormous complexity. But what exactly is it? The instrument bears inscriptions, unfortunately heavily corroded by sea water, that seem to refer to zodiac positions with a great deal of accuracy which, apart from its perfection in manufacture, is something that then also involves a considerable amount of astronomical expertise. It also has certain similarities with some known astronomical instruments and is
thought to possibly be an advanced type of ‘astrolabe’, a celestial calendar and navigational device used for determining and exhibiting the year round positions of stars and planets. 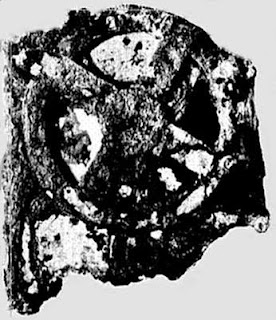 Adding even further to the puzzle, the wreck, from which the device was salvaged, dates back to nearly one hundred BC and it has been previously thought that such refined craftsmanship was completely unknown until the mid 16th century. No other artifact that comes anywhere near this degree of sophistication has ever been recovered from another wreck either before or since. Even Astrolabes that have been recovered from vessels that sank millennia later look simplistic by comparison as this diagram shows. 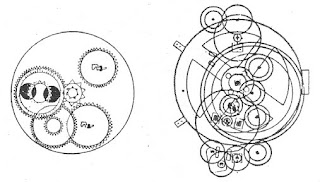 The Antikythira Device is very much a puzzle in itself but another very intriguing part of the puzzle is this: For this kind of precision machined instrument to even exist, it means that there must also have been an equally sophisticated machine on which it was made, yet we have no record of such a machine ever existing and no hint of any such capability has ever been found, so who made it – and how?
Posted by Aapje Nootje Soeverein mens at 12:53 AM