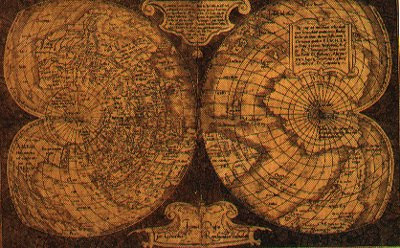 And even yet another intriguing map is one drawn in 1538 by Mercator, another highly respected cartographer who lived in the 16th century. His works are quite famous and you can still buy a Mercator atlas in shops today. Mercator was known to periodically update is works and produce a new, more definitive world atlas as more shores became charted and more accurate charts become available to him. In doing such an update, his 1538 world map (fig.5) was replaced by a new one in 1569. However we now know that not only was his 1538 map far more accurate than the latter one but what proved to be even more amazing was that it also contained correct measurements of longitude. To put all this mention of longitude into some sort of perspective for you: Longitude is the distance in degrees east or west of the Prime Meridian. Due to the Earths rotation, it is far harder to calculate longitude than it is latitude, which can be measured by using the stars or the sun for observation. To calculate Longitude, requires an equation of ‘distance = speed x time’ and, most importantly, an accurate clock. Discovering longitude was once described as "greatest of all naval problems" and in the 1700’s an actual Board of Longitude was set up in England to solve the issue. In 1714, Sir Isaac Newton appeared before the board and explained that the real problem was that "a watch required for such accuracy has not yet been invented". The Queen then offered a prize of 20,000 pounds to any man who might build such a device and finally, in 1761, a man by the name of Harrison claimed the prize and put forth his prototype chronometer which then "ushered in a new era of sea travel" for the world. During the 19th century maps then began being updated with the correct degrees of longitude. However Mercator’s map of 1538 was marked with correct longitude a full 223 years before it was discovered. Where was he able to gain that information from? It is obvious that Mercator himself had no real knowledge of longitude at the time and must have borrowed or been given the information from another source because he then updated his subsequent maps incorrectly with what was considered to be more recent and therefore, supposedly more reliable information. These maps constitute some extremely significant evidence indeed, for if ancient man had never circumnavigated the globe or possessed any knowledge of longitude then how can any of these maps exist?
Posted by Aapje Nootje Soeverein mens at 10:20 AM