In any list of strange and unusual artifacts one of the first things that comes to mind is, of course, the Great Pyramid in Egypt. The Pyramid has been the source of endless theories, ideas, rumors and speculation. Amazing powers have even been attributed to it. Though many theories have been put forward as to how the pyramid was built, under scrutiny, none presented so far have proved able to be adequate. It has been theorized to have been built to serve as everything from a tomb, to an initiation chamber, to a cosmic beacon, to a giant water pump and many other things besides. Endless books have been written on it and endless theories argued. Indeed the entire Giza Valley Complex is quite remarkable and there are many mysteries surrounding the entire Necropolis; its uses and construction. 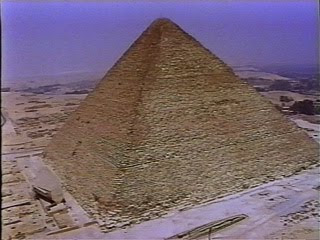 The Great Pyramid is the largest and most controversial of the three large Giza Pyramids. It stands at one side of the three. It’s not the one in the middle with the limestone casing still intact near its summit as many erroneously believe but is in fact the pyramid behind that one, the one that has been completely stripped of its limestone casing and is missing the cap stone (The missing cap stone is an intriguing mystery all on its own). But before we continue, some facts about the Great Pyramid must be taken into account, if only to answer the question: Why all the debate? So please first consider these rather interesting points: The Great Pyramid (fig.71) is about as high as a 40 story building and contains an estimated 23 million blocks of rectangular limestone, each weighing an average of 2.5 tons (though the exact number is still an issue for contention and recent x-rays have revealed there actually may be as little a half that amount). The blocks are fitted together so precisely that a thin knife blade cannot be inserted between any of them. In its finished state it was covered with smooth limestone casing 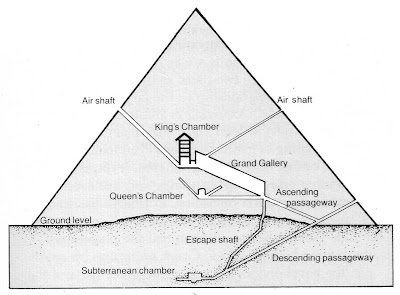 stones which created a surface that weathered to harden and become smoother and shinier with age causing the pyramid to reflect the Sun and shine brightly from a distance. Napoleon described it as shining like a diamond on the distant horizon. It is said that in those days it was actually visible from Palestine. Its sides rise up from the ground at a uniform 51 degrees and it is almost perfectly square and level. So great is its accuracy that no other structure that has been built, either before or since, is comparable to it. Even those buildings constructed recently using modern laser methods cannot equal the accuracy of this single ancient stonestructure. The method employed to square and level the base prior to commencing its construction is also a total mystery because, to make matters even more difficult, a large hump of bedrock exists near the center of the base of the Pyramid which actually protrudes into the mass of the pyramid itself. This hump of protruding bedrock is nowhere near level which means that a standard 4, 5, 6 method of squaring the base could not have been used, and yet the first layer of blocks have been laid directly and fitted perfectly onto this bedrock base to create a perfectly level second layer. The Great Pyramid is accurately aligned to True North, not Magnetic North (which would have been a lot easier) more accurately that any other existing structure built either before or since. Creating various equations using its measurements produce results that give us the distance from the Earth to the Sun, The distance from the Earth to the Moon, The diameter of the Earth, The Radius of the Earth at the equator, The length of the solar, sidereal and anomalistic years and the mathematical formula of Pi, thousands of years before it was discovered - just to name a few. 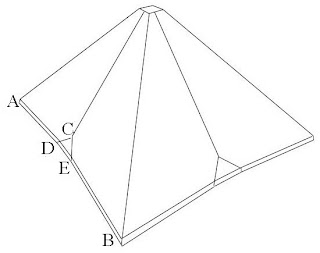 If it is indeed a tomb as we are told then the Great Pyramid has also somehow been constructed in the most difficult way imaginable, even to the extent that it would appear the builders were looking for the hardest way possible to build a structure. The building and layout of the stone blocks is indeed so remarkable with the blocks fitted together to such a degree of precision and in such an unusual fashion that even the most sophisticated, scientifically minded construction teams have not been able to replicate it (even a scientific team who tried using Laser cut Styrofoam and glue). It contains so much stone that it could swallow within its structure, all of Saint Paul’s Cathedral, Westminster Abbey in London, Saint Peter’s in Rome, and the Cathedrals of Florence and Milan without even bulging at the sides. The sides of the Great Pyramid are not flat. There is actually a slight indentation that runs up the middle of each side starting in a flat triangular section in the middle of each side.These indentations were not noticed until the mid 20th century when an aerial photograph was taken of the pyramid. These new points have provided scholars with new points of reference for various measurements but they also raise some more intriguing questions. Remember, the Great Pyramid used to be covered with a polished limestone casing that was flat and smooth, completely obscuring these indentations. So why on earth were they put there in the first place? And then, after completing such a feat of perfect construction, why then cover them up with casing stones? What on earth was the point to such an exercise? However, because the indents are there, we can now measure from one corner to the other ie: A – B, we can measure across the bend to all points ie: A – D – E – B and we can measure from one corner to the top of the flat triangle to the other corner ie: A – C – B. Please note that all measurements are done in pyramid inches and sacred cubits. A pyramid inch is .0011 larger than a standard inch while one sacred cubit is 25 pyramid inches. This method of measurement is only found at Giza, the U.S.A and Stonehenge and is the same method of measurement that is used and described in the bible for such things as the two arks.
Interestingly, the distance between points A – B is 365.242 sacred cubits, the exact length of the solar year. The distance across the indentation between points A – D – E – B is 365.256 cubits, the exact length of the sidereal year. The distance between points A – C – B is 365.259 the exact time it takes from earth to return to its perihelion, the anomalistic year. When a circle is made by using the arc created by the indentation, the circumference of the circle is the same as the circumference of the earth at the equator. And yet the casing stone were flat! Why were these incredibly accurate measurements purposely contained in the stonework beneath them? In the ‘King Chamber’ is a hollowed out stone block rising from the stone of the chamber floor that appears to have been fashioned by an as yet unknown means that we are told was where the sarcophagus would have lay. Because of the placement of the stone blocks, passage ways and hollow spaces above the chamber the room is extremely resonant, causing the entire pyramid to ring like an enormous bell when this hollow stone block is struck. What purpose does all this serve? Coincidence? Still an impossible feat of engineering by today’s standards, the Great Pyramid just stands there elegantly and defiantly before us, an absolute marvel of construction and mathematics, a complete mystery and a true wonder, by any measure. So how did it all get there? Who built it? How was it done and why was it built at all? Why on earth go to so much trouble and use such a bizarre and difficult design? And why incorporate so much mathematic, scientific and astronomical information into its measurements? The Great Pyramid is commonly believed to be the work of the Pharaoh Khufu also known as Cheops. Construction of the Pyramid is said to have taken place during the reign of Khufu about 4500 years BP at around 2500 BC while the Sphinx is thought to have been constructed at a later date, presumably within Khufu’s son Khafre’s life time. Therefore the Pyramid is presumed to be slightly older than the Sphinx. We are told that the smaller pyramid of three found at the Giza complex was built by the Pharaoh Menkara. These are the mostly accepted theories and indeed are widely taught as fact by Egyptologists and in schools throughout the world. Some of the main reasons given for coming to these conclusions and believing that the timeline of 2500 BC is correct are as follows: There exists in the Giza valley near to the Great Pyramid, a Stele that mentions the name of Khufu. The Pyramid is said to be the final rest resting place for Khufu, though no remains have ever been reported to have been found inside. There is also an inscription within the Pyramid itself, located on a wall in a small ante chamber in a roof section above the Kings Chamber appearing in a manner similar to graffiti which also bears the name Khufu. There was a Mummy retrieved from the smaller pyramid in 1837 that was reported to be the remains of Menkara that is also widely believed to validate the theories. But there are serious problems with this reasoning.
Posted by Aapje Nootje Soeverein mens at 10:40 AM