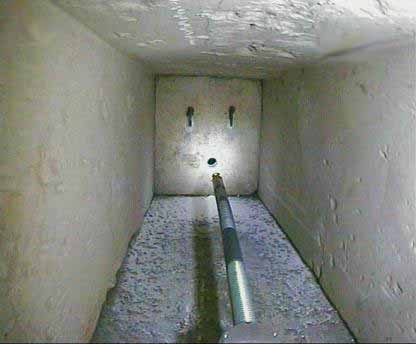 A robot explorer sent through the Great Pyramid of Giza has begun to unveil some of the secrets behind the 4,500-year-old pharaonic mausoleum as it transmitted the first images behind one of its mysterious doors.
The images revealed hieroglyphs written in red paint that have not been seen by human eyes since the construction of the pyramid. The pictures also unveiled new details about two puzzling copper pins embedded in one of the so called "secret doors."
The winning robot, designed by Leeds University, has indeed gone further than anyone has ever been before in the pyramid.

The project began with the exploration of the southern shaft, which ends at the so called "Gantenbrink’s door."
The robot was able to climb inside the walls of the shaft while carrying a "micro snake" camera that can see around corners.
Unlike previous expeditions, in which camera images were only taken looking straight ahead, the bendy camera was small enough to fit through a small hole in a stone "door," giving researchers a clear view into the chamber beyond. It was at that time that the camera sent back images of 4,500-year-old markings.
"There are many unanswered questions that these images raise," Richardson told Discovery News. "Why is there writing in this space? What does the writing say? There appears to be a masonry cutting mark next to the figures: why was it not cut along this line?" Roberston wondered.
The researchers were also able to scrutinize the two famous copper pins embedded in the door to the chamber that had only ever been glimpsed from the front before.
"The back of the pins curve back on themselves. Why? What was the purpose of these pins? The loops seem too small to serve a mechanical purpose," Richardson said.
The new information dismisses the hypothesis that the copper pins were handles, and might point to an ornamental purpose.
"Also, the back of the door is polished so it must have been important. It doesn't look like it was a rough piece of stone used to stop debris getting into the shaft," project mission manager Shaun Whitehead, of the exploration company Scoutek UK, said.
The Djedi robot is expected to reveal much more in the next months.
The device is equipped with a unique range of tools which include a miniature "beetle" robot that can fit through a 19 mm diameter hole, a coring drill, and a miniaturized ultrasonic device that can tap on walls and listen to the response to help determine the thickness of the stone. 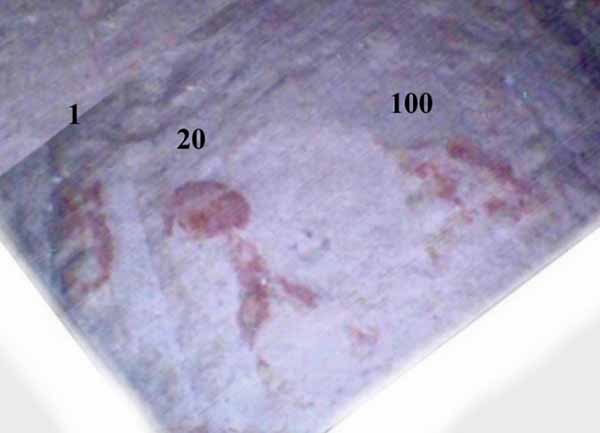 The next step will be an investigation of the chamber's far wall to check whether it is another door, as suggested in the 2002 live exploration, or a solid block of stone.
"Then we are going to explore the northern shaft," Richardson said.
The team has committed to completing the work by the end of 2011. A detailed report on the findings is expected to be published in early 2012.

Mysterious hieroglyphs written in red paint on the floor of a hidden chamber in Egypt's Great Pyramid of Giza are just numbers, according to a mathematical analysis of the 4,500-year-old mausoleum. Shown to the world last month, when the first report of a robot exploration of the Great Pyramid was published in the Annales du Service Des Antiquities de l'Egypte (ASAE), the images revealed features that have not been seen by human eyes since the construction of the monument. Researchers were particularly intrigued by three red ochre figures painted on the floor of a hidden chamber at the end of a tunnel deep inside the pyramid. Luca Miatello, an independent researcher who specializes on ancient Egyptian mathematics, believes he has some answers. The markings are hieratic numerical signs. They read from right to left, meaning 100, 20, 1. The builders simply recorded the total length of the shaft: 121 cubits. The two main figures are similar to the hieratic number 21. The royal cubit, the ancient Egyptian unit of measurement used in the construction of the pyramid, was between 52.3 and 52.5 cm (20.6 to 20.64 inches) in length, and was subdivided into seven palms of four digits (four fingers) each, making it a 28-part measure.