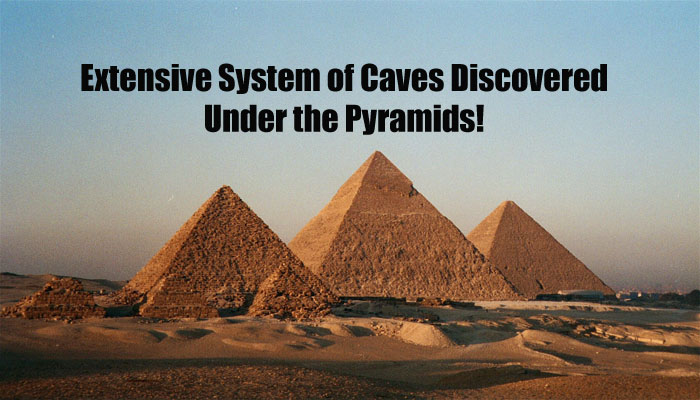 As an "all Egyptian" archaeological team moves in to find answers we hope they will reveal what's really there. Something extremely strange is happening in Giza, both under the pyramids and in the office of Dr. Hawass. Even skeptics of the "Hall of Records" from Atlantis are now forced to admit that something big is being hidden. It's the perfect set of circumstances for conspiracy theorists -- especially with the coming of 2012.
In August of 2008 a system of caves was discovered under the pyramids. Certainly this is very big news. But look at the reaction of Dr. Hawass on his website:

Surely Hawass is intimately aware of such a discovery. So Why deny it? What is he trying to hide? Dies this have anything to do with the wall that is being built to surround the Giza complex? What secrets don't they want us to know?
Inside Giza's cave underworld
In December 2009, after denying that they existed, Egypt's leading Egyptologist, Dr Zahi Hawass, has had to admit that an excavation team under his charge is investigating an ancient tomb at the centre of claims regarding the alleged discovery of a cave underworld beneath the Pyramids of Giza.
This is a surprising announcement for several reasons, not the least being that the "alleged" cave system has already been explored and photographed by British writer and explorer Andrew Collins. In August 2008, Collins announced that he had rediscovered the entrance to a previously unexplored cave system, entered via a mysterious tomb several hundred meters west of the Great Pyramid. Perhaps it was how Collins discovered the cave entrance that has caused the controversy. 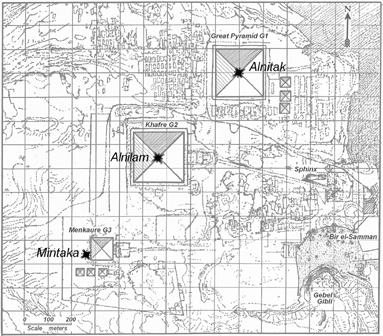 The alignment of the three pyramids with the stars of Orion's belt [above] is not perfect.
Much has been made observation that the three pyramids on the Giza plateau appear slightly mis-aligned. They are not on a straight line. Since we marvel at the mathematical perfection of the early Egyptians, this has bothered investigators. Thus when in 1993 Robert Bauval and Adrian Gilbert in their bestselling book The Orion Mystery saw the three 'belt' stars of Orion as defining the ground-plan of the Giza Pyramids the theory was met with cautious enthusiasm. However, not all were convinced by the "Orion Correlation Theory" (OCT), as it became known.
The alignment wasn't "perfect" but it was close enough for many Egyptologists. But not for Andrew Collins. 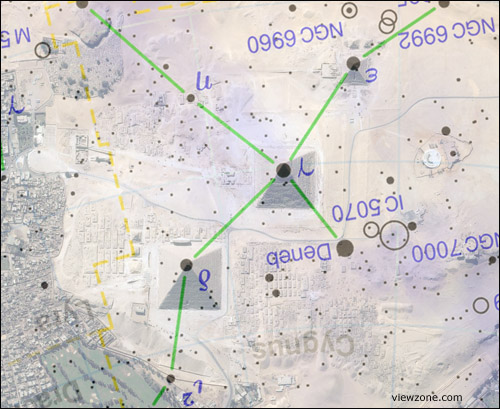 The alignment with the "wings" of Cygnus [above] is perfect. 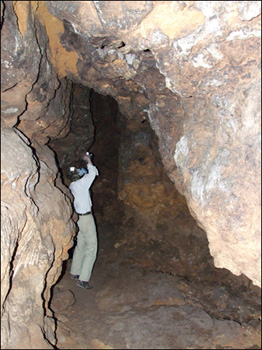 Collins discovered another group of stars in the constellation Cygnus that matched with the same perfection that was the trademark of the Egyptians. By superimposing the stars of Cygnus over the three pyramids he could see that one star, Deneb, was not aligned. Looking where something should be -- a pyramid or temple -- there was nothing. Perhaps time had destroyed it? Perhaps it was buried? Or perhaps it was a sign that something else was under the plateau, waiting to be discovered.
Collins later found clues left in the 200-year-old memoirs of British diplomat and explorer Henry Salt. Salt wrote how, in 1817, he and Italian explorer Giovanni Caviglia had investigated cave "catacombs" at Giza for a distance of "several hundred yards" before coming across a "spacious" chamber. This chamber linked to three others of equal size, from which went various labyrinthine passages, one of which the Italian later explored for a distance of "300 feet further".
Collins decided to look for these caves in the area where the unmarked star of Cygnus would align in relation to the three pyramids. He discovered a series of catacombs, as Henry Salt had described, but no sign of any caves. Then, as he was about to leave the site he noticed a break in the catacomb wall which eventually revealed the entrance to this huge complex network of caves.
Excited by this monumental discovery, Collins immediately went to inform the Egyptian authorities and expected them to be as excited as he was. Wrong!


Egyptian authorities try to hide the cave discovery
According to Collins,


"Dr Hawass [Secretary General for Egypt's Supreme Council of Antiquities] actually denied the existence of the caves. He has done this publicly. Why he has done this is a matter of debate. The most easiest explanation is that the preliminary investigations that he did following our visit to inform him of the discovery of this cave, in April 2008, meant that his people went in the tomb overlooked the entrance, as we did initially."

Fifteen months later, bowing to the inquiries made by the press and Egyptian scholars, Dr Hawass confirmed that he has ordered an all-Egyptian team to explore the tomb at the center of the "controversy". Controversy? How could a discovery on such a scale be controversial?

"We are clearing this system now, and it is a Late Period catacomb, like many others around Egypt," he stated this week. "There is no mystery about it, and there is no connection with esoteric topics. We will publish our results as part of our normal process."

While applauding Dr Hawass's new interest in the site, Collins remains sceptical of his motives. "We knew in August that he had started clearing the tomb," he said. "The excavations began almost immediately after knowledge of the cave discovery hit the internet."
Collins is also unconvinced by Hawass's explanation of what he calls the "catacomb". "Does his use of the term 'system' now suggest that he has found and entered the caves, which he previously denied even existed? he asks.

"My colleagues and I have examined photographic evidence of dynastic catacombs throughout Egypt, and these all appear to be carved by human hands." --Hawass 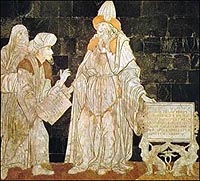 But photographs don't lie. Collins says, "Those at Giza are natural, and penetrate the bedrock for many hundreds of metres, perhaps following the course of local geological faulting."
Although Dr Hawass suggests there is no mystery surrounding the "catacomb", Collins suspects that the caves extend beneath the Second Pyramid, where ancient tradition puts the legendary Tomb of Hermes [right], Egypt's legendary founder. This is significant because Hermes is known as the Great Wisdom Bringer and Collins suspects that the chambers could possibly reveal something left behind by Hermes -- something like the legendary Hall of Records.
The Hall of Records -- as prophesied by Edgar Cayce?
According to the legendary psychic, Edgar Cayce, the pyramids were constructed by an ancient civilization that had its origins in Atlantis. This great civilization existed somewhere around 10,000 to 11,000 BC and was responsible for building the Great Pyramid, and for burying the lost history of mankind in a chamber called "The Hall of Records." 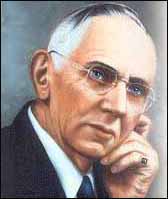 "The records are one... [They contain] "...a record of Atlantis from the beginnings of those periods when the spirit took form or began the encasements in that land." -- Cayce

The records extend through the first destructions of that ancient civilization, the exodus of Atlanteans to other lands, and the final destruction of Atlantis. They contain a description of the building of the Great Pyramid, as well as a prophecy of "who, what, where, would come [to make] the opening of the records." Collins says,


"This has never been found. So perhaps it is still there, awaiting discovery, somewhere close to where Salt and Caviglia reached nearly 200 years ago. "I do believe that the caves that we have entered are part of a much larger complex that stretches right beneath the entire Giza plateau."

Collins explains that the network of caves are natural and resemble Swiss Cheese. He believes they were formed long before the pyramids were built and suggests that they could be the reason the pyramids were built on this site. The early civilizations believed that part of the dying process involved traversing the so-called "underworld" and these caves might have been viewed as the entrance to this underworld. There is evidence of human activity in the deepest parts of the caves.
Satellite images help verify the caves
According to Collins, "Satellite images would tend to suggest that the caves... go all the way to the Second Pyramid." A little west of here archaeologists have found a collection of bird mummies. Since the constellation of Cygnus is historically depicted as a bird, specifically a swan, it is theorized that worshippers left mummified birds as an offering associated with this star configuration or perhaps to Socar, the bird-like figure that was the ruler of the underworld. 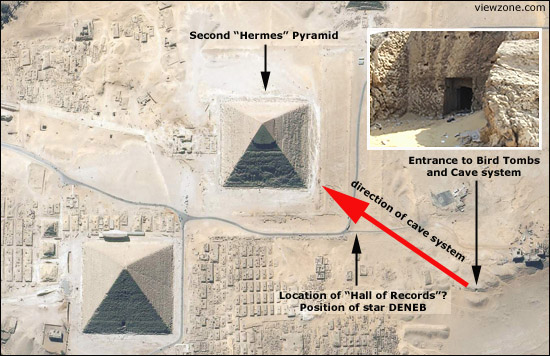 From the entrance of the caves it appears that you can travel towards the Second Pyramid and directly under the spot where the Cygnus star, Deneb, would be aligned with the three pyramids and the wings of Cygnus. Is this where we will find the famed "Hall of Records"? Will the Egyptian government allow the world to know about what's really there? Why are they being so secretive?
What's in the caves
As of February 2010, Dr Zahi Hawass revealed that the system of caves was being probed by a host of experts.


"We have experts in all fields working with us," he revealed this week. "Archaeologists, geologists, engineers, and architects, to name a few... I will be posting information about our excavation at Giza on my web site and will be publishing the results of our work in due course."

Work at the cave-tomb, designated "NC2" by American Egyptologist George A. Reisner, has discovered two new rock-cut shafts and stairways leading into a maze of underground chambers and galleries never seen before in recorded history. Dr Hawass has suggested that they may date to the Old kingdom period. It appears that the caves were originally used as catacombs but leter were used for a bird necropolis, where mummified birds and other small animals were offered as sacrifices.
A British man named Richard Gabriel and his partner Judith was able to gain access to the tomb and cave system and take a sequence of breathtaking pictures. The top 5 photos are from the actual tomb. 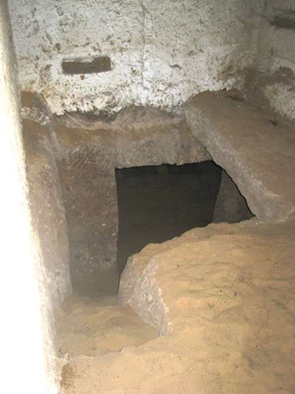 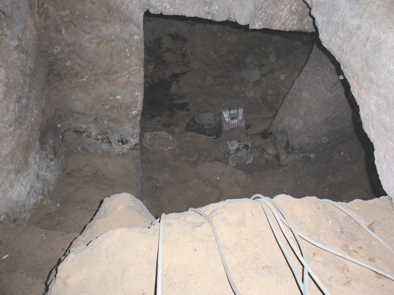 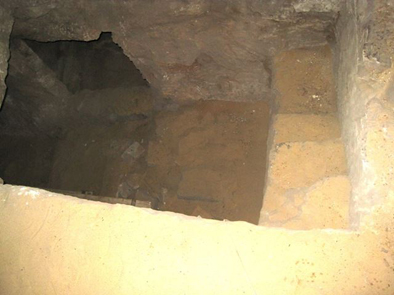 Notice the many electrical cables [above, left] indicating the level of activity currently being undertaken in the caves. 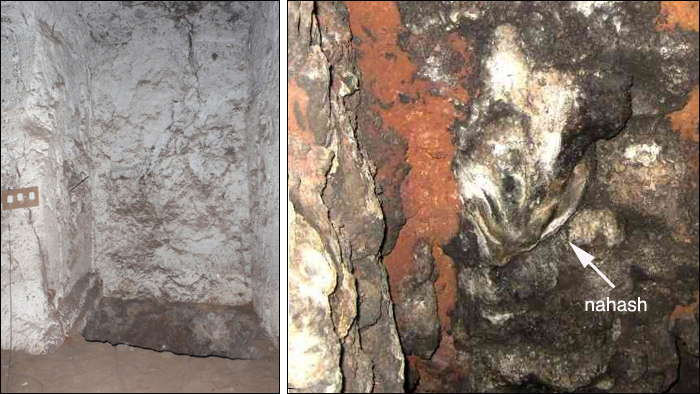 One photo [above, right] displays rock simulacrum in the form of a snake's head, making sense of local folk stories which claim that the caves are haunted by a giant snake called el-Nahash.
So now we wait. What will these "Experts" find in the maze of caves? Are there records of a prior civilization, describing their accomplishments in science and philosophy? Are there warnings of a fate that they once survived and is yet to befall us? And will they tell us if they do find these things?
What do you think?
Posted by Aapje Nootje Soeverein mens at 12:03 AM