The Orontius Finaeus Map of 1531

The Orontius Finaeus map (fig.2) was found in 1960 by Charles Hapgood and it too, apparently shows the continent of Antarctica along with the accurate outlines of Antarctic rivers that are now covered by thick glaciers. The map was found in the Library of Congress in Washington DC where it had been sitting unstudied for a great many years. In the map the continent and coastline is shown to be ice free and, like the Piri Reis map, it too shows an accurate depiction of the Ross Sea which today is totally hidden beneath a floating ice shelf several hundred meters thick. Studies of actual core samples taken from the Antarctic ice shelf have also clearly revealed numerous layers of strata in the ice showing that the area has indeed gone through several periods of dramatic environmental change. Some sedimentary deposits that were found in the samples were from sea water that had flowed into the area and were even actually datable. The tests show that the sediments were deposited sometime around 4000 years ago which indicates that the Ross Sea would have had to have been flowing and free from ice at the time for the deposits to have occurred. 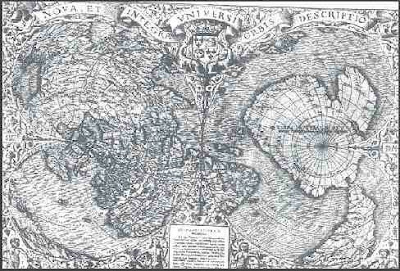